The Elks Magazine is featuring my article on citrus. Enjoyed the research and writing of this one. Imagine all writers have favorite "children." Two of my favorites from a number of years ago were one about gelaterias in Rome and another about touring the Peruginia chocolate factory in Perugia, Italy. My husband's favorite was testing the gelato. Of course, we had to taste what I wrote about. I tend to think beginning with a title you love makes the writing go much more smoothly although editors do have a tendency to change them. Do you have a favorite? Bests, Elise

"Brush Up Your Shakespeare" 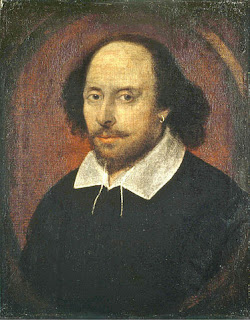 From singer Rosanne Cash, "Just a reminder that when Shakespeare was quarantined because of the plague, he wrote King Lear." Something to strive for...

Scene Stealer is available at Barnes & Noble and wherever eBooks are sold.

Daniel in the Book of Daniel interprets Nebuchadnezzar, the King of Babylon’s dream. The king dreams of a sculpture made of gold, silver, brass and iron—seemingly strong but flawed because his feet are made of both iron and clay. The clay will cause the sculpture to topple. Recently newspapers talked of Michelangelo’s David and the unexpected weakness of his feet. Feet of Clay has been employed for millenniums to refer to a person’s weakness of character. Today we talk of Achilles Heel as a failing that can cause a powerful figure to perform ineffectively. Greek mythology relates the prophesy that the baby Achilles would die at a young age. Thetis, his mother, took her child to the River Styx, believing its magical powers would shield Achilles from harm. Thetis immersed the baby in the water holding him by his heel—the water bathed every part of his body except his heel—a physical failure. Achilles lived through many battles but during the Trojan War died from a poisoned arrow shot by Paris that become fixed in the one weak spot his mother could not protect. In folklore, a Golem is created from inanimate matter—clay or mud. Raw material that leads to an unfinished human. It is often employed today to describe someone blundering, and dense who may carry out man’s orders under some conditions but is hostile and destructive under others. I don’t read many biographies anymore. Bios often show the feet of clay, the Achilles heel, the sometimes destructive artist I had previously respected and admired and I find it affects my enjoyment of their work. It’s hard for me to separate the shallow, often despicable person described in the page of a book from my personal image of the painter, actor, or author whose work I once treasured. Many people can compartmentalize and separate the artist’s work from his or her behavior, I find it difficult. How about you?

When I pick up my cup of coffee to begin my day, I think of Lonesome, an Emu we met while visiting Australia where curious Koalas stared at us wondering what sort of creatures these fur-less strangers were, fur seals ignored us--and snoozed in the sun and kangaroos, as friendly as puppies gathered around. A short ferry ride, on the Sealink, across the Backstairs Passage, brought my husband and I to Kangaroo Island. Lonesome, the Emu, yearned for friendship and his own egg to sit on. He lives at the Emu ridge Eucalyptus Oil distillery, where the oil distilled from a multi-stemmed tree called the Narrow-Leaf Mallee produces the Bush product used as an insect repellent, stain remover, disinfectant, flea-remover, antiseptic and mouthwash. For reasons known only to his fellow Emus, Lonesome is ignored making it difficult for him to father the egg, paternal Emus are born to sit on. We were given a bottle of eucalyptus and I bought the mug with Lonesome's likeness. We chatted awhile and listened to the guide tell Lonesome's story as he scratched his feathered head. he seemed like a charming bird to me but I guess he lacked that certain something a female Emu looks for in a future mate. romance can be difficult. 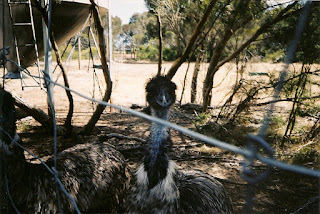 I greet him everyday as I add a teaspoon of sugar, and a few drop of milk to my coffee. Hope he finally found the right mate. 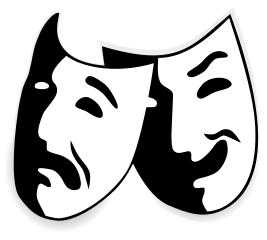 Before I became a freelance writer, I worked in the theater. First as a singer/actress,later as a stage manager. During rehearsals, the elevator door to the studios would open and often out would come a man who would stop anyone on a break and ask, "Are you anybody?" My answer was ,"Everybody is somebody." I learned he sold ice cream from a cart to make his living and it was rumored that if he managed to obtain an autograph from a star or featured player, he sold it. After I became a stage manager, one of my jobs was to get rid of the man. One director would get uptight whenever he saw him and one day the "ice cream man" stepped out of the elevator just as our director approached. I saw the look on the director's face and quickly somehow managed to get the man back on the elevator and push the down button. Not quite sure how I managed as I'm 5'4" if I stretch and the "ice cream man," was a foot taller. Often after a show finished for the evening and the cast was leaving, we would see him along with other fans who collected autographs waiting at the stage door. Today, requests are accomplished via email. When I was just beginning in the show business, I worked children's theater in North Carolina playing elementary schools. the kids would come up and ask for our autographs making us feel like stars until one day one little boy shouted, "I've got them all, now what do I get for them?" A major blow to our egos. Bests, Elise 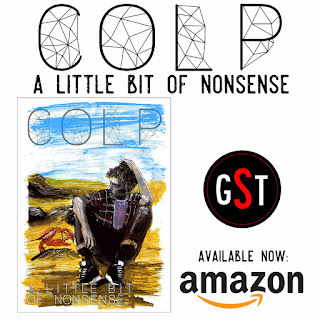 Flame Tree Publishing has included A Mouthful of Murder, featuring my amateur detective, Augusta Weidenmaier, in their anthology Cosy Crime Short Stories. Log on to https:www.flametreepublishing.com/Cosy-Crime-Short-Stories.html to find out more about the hardcover edition of the book. It will also be available at Amazon on March 26 and Barnes and Noble.

A non-fiction article about Oranges will be making its appearance soon. I'll keep you posted about that.

THE METROPOLITAN MUSEUM OF ART 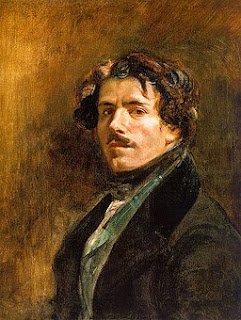 Living in New York gives me the opportunity and pleasure of frequently visiting the Metropolitan Museum of Art. Went last week to see the Eugene Delacroix Exhibition—a showing organized with the Louvre Museum. The exhibit is in two Galleries—I began with his sketches on paper—watercolors, sketchbooks, and old master prints that Delacroix copied plus drawings he made to make ready for major undertakings. He often sketched the tigers and lions at the Jardin des Plantes in Paris and examined the behavior of house cats. His painting of the tiger is included in another section that holds a wealth of his paintings—four decades of his artistry. 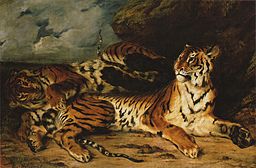 Known as a giant of French Romantic painting in the 19th Century, Delacroix’s paintings are on exhibit in Gallery 899 and may be seen until January 6, 2019; the display includes Greece on the Ruins of Missolonghi, Women of Algiers in their Apartment, Self Portrait in a Green Vest and The Abduction of Rebecca. Delacroix was interested in out of the ordinary subjects, and distant countries and he painted scenes inspired by the writings of Lord Byron and Shakespeare. One of his most famous works, Liberty Leading the People (the July revolution of 1830) was purchased by the French Government in 1831. 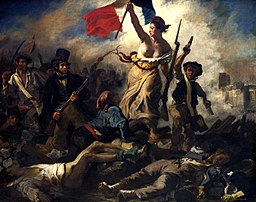 He received commissions to paint rooms at the Palace of Versailles. In later life he devoted periods of time away from Paris. In rural areas he painted still lifes of flowers and numerous versions of paintings called The Lion Hunt. If you’re visiting NYC, don’t miss the Met.

My eBook, Scene Stealer, is available wherever eBooks are sold. Flame Tree Publishing will be publishing an anthology of Cozy Mysteries due this January. My story, A Mouthful of Murder, featuring August Weidenmaier is included.

Booklover Book Reviews
I highly recommend Elise Warner's Scene Stealer to fans of cozy mysteries - it was a fun and entertaining read. I look forward to reading the next Augusta Weidenmaier mystery!

World of Books
We meet some interesting characters which makes you want to stay glued to the book. An enjoyable read...I hope there will be a second book and if so I will be waiting.

Mysteryfiction.net
This is a tale I'm pleased to recommend to any fan of the cozy mystery. Talented Elise Warner has crafted a tale that blends Agatha christie with hints of radio's Mr. and Mrs. North, a pleasing combination for any reader who enjoys a fun read and meeting new amateur sleuths. 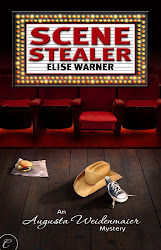 Elise Warner
Before becoming addicted to writing, I worked on Broadway and on the road as an actress, singer and stage manager. Small Time, my second play, won Theatre Guinevere’s “Guinny Award” and was later part of the Maxwell Anderson Playwright’s Series. An enthusiastic traveler, I have written for the Travel Section of The Washington Post and magazines such as Rock & Gem and The Gold Prospector (inspired by old mining camps to Australia and New Zealand.) In memory of my toy poodle, Jackie, I wrote about a Musical Comedy troupe touring the United States with pet dogs, published in the Anthology Good Dogs Doing Good, and a short story that won second prize in the American Kennel Club Magazine contest. Articles dealing with American history have appeared in magazines such as American Spirit, Pennsylvania, The Elks and The Villager. An avid fan of mysteries, my short stories have appeared in Mystery Time, RTP and The Deadly Ink Anthology. I am married to Bob Bernard, a dazzling tap dancer; we live in and love New York City. Scene Stealer, a mystery, is my first eBook - published by Carina Press- and my first audio book – published by www.audible.com .